Satire today has great viability and impetus within a society that is estranged from itself. In times of high insecurity, and an anger of social inequalities along with the general public’s disillusionment, of the power elite, has enabled a revived focus on humor, and satire to vent public opinion, and appease anger and frustration. The relevance of satire can be observed within the current revival of Spitting Image (Fluck: Law1984) for example, or the ongoing ever more vicious satirical cartoons in the national press, or the relatively recent digital Meme’s that have seen a proliferation in modern society. As Ponton DM (2021) p.768. Postulates, political satire in social media, in memes that circulated at a time when the COVID-19 pandemic was having dramatic effects on social behavior, restricting civil liberties on a scale unknown in western nations since World War II. The rash of comic satirical memes that began to circulate across social media were a predictable response to this latest situation. Satires mocking and critical ways make it so explosive that the symbolic violence of its distortions motivates actual violence on the part of those who feel targeted (or offended) by its referential finger-pointing and nose thumbing. An example of the power of satire are the murders on January 7, 2015, of twelve people at the satiric magazine Charlie Hebdo in Paris. What can we learn from the Charlie Hebdo murders similarly the Salman Rushdie affair of 1989–98, both were prompted by perceived disrespect to Islam in satiric art works, and from the vigorous discussions the murders prompted among media commentators and bloggers concerning satire’s offenses and dangers . Familiar positions on and debates about satire’s intentions, differentiating strategies, targets, effects, and moral positions and related debates about free speech and censorship received new airings in the context of the murders and the renewed attention to satire they prompted. By examining key positions and recurring assumptions in the public discourse on satire after the shootings, the essay shows how a relatively dormant field of scholarly theory and classification was reinvigorated by real-world events that test its assumptions and demonstrate, in compelling new ways, the Risks and perils of satire’s unstable power in our heterogeneous societies. 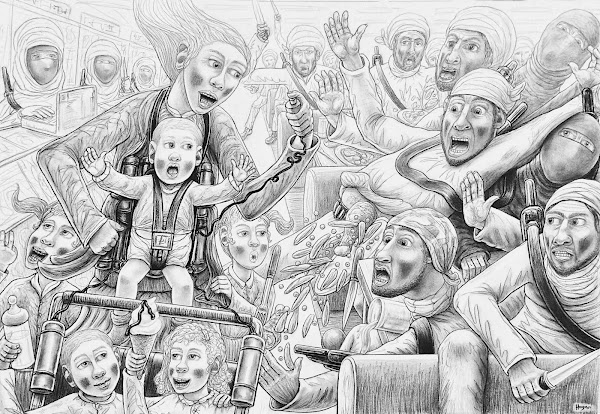 my satirical work can be found here: The purpose of my research is to investigate envirobiopsychosociospiritual factors that may influence satirical and personally challenging imagery processing, and comprehension. I am also interested in finding how and why the general desensitisation of contemporary moral and ethical paradigms may have been compromised by the seemingly ever-expounding cultural decadence. Satirical illustration and writing have been at the fore front of social and political commentary in western society since the advent and proliferation of print development. https://www.oxfordartonline.com/page/british-visual-satire-18th-20th-centuries A Rakes Progress is a notable example of satirical illustration. Used to moralise and criticize the morality and integrity of the wealthy upper classes. The Rakes progress is a series of eight paintings created by English artist William Hogarth (1732-1734) Hogarth who later made engravings, published in print form in 1735.The series follows the decline of Tom Rakewell, a spendthrift son and heir of a wealthy merchant. He traveled to London and wastes all of his fortune on luxury, women, and gambling, Tom was eventually imprisoned in fleet prison and ultimately Bedlam hospital for the insane. Throughout the 19th and 20th centuries the national press has maintained and continue to offer today, a satirical cartoon series, to a very popular effect. Illustrators such as Raymond Pettibon (1957-present) Is an American illustrator, who in the 1980’s was informed by the punk rock scene and created posters and album art for prominent bands under his brothers (Greg Ginn) SST records label. His satirical illustrations focused on using American iconography, acquired from contemporary literature, philosophy, art history, and politics, religion, sport and sexuality, to high acclaim. I completed a contemporary edition of A rakes progress, and was highly influenced by Pettibon amongst other satirical illustrators working today. My rationale for pursuing further study in this area, is born from a personal and professional need to reinvent myself as an illustrator. My current practice involves writing and illustrating children’s books. I have written and illustrated two children’s books to date, and illustrated a third book for a client. However, I wish to change direction as part of the Research PHD.I wish to focus on illustration for the adult book market. (non-fiction) only. Throughout my MA research I discovered a niche that I could utilise in my quest for originality. I have discovered that there are no previous or current, adult focused, wimmel books available, that utilise everyday human experience. The examples I have given above are examples of how illustrators have used specific individuals and social situations to create discourse, and influence opinion. My focus is different, and unique, in that I will be using every aspect of human endeavor in modern day society. Inclusive of all the social horrors, along with, the moral and ethical actions and inequalities that are observed in everyday society, and committed by individuals within it. Inclusive of murderous acts and sexual deviance. The purpose of my research is to ascertain the level of comprehension and process involved with making sense, and accepting, or not accepting of illicit imagery. How will the finished wordless book be read, it will be unacceptable to certain individuals, and publishers. I will analyze the power of the drawn image to test human sensibilities. Indeed, there is any power left in satirical images in an image saturated society. In a society where the internet has opened up the whole of human disfunction for all to see. How does a hand drawn image measure up? I believe my own focus of turning the satire inwards to the reader, to open up an inner questioning of morality, is a powerful message to implement, however, how will each individual perceive the truth about the potential disfunction of human beings in a perceived moral and just society? My research will focus upon the 21st century, predominately within the western societal framework. My research is not concerned with a wholly political view, of current cultural paradigms. Although, political overtones will be present in my practical work. I am also unconcerned, with specific characterization of political or public figures. Any characterization will be within and limited to, the subtleties of the visually humorized aesthetic of the characters. The characters being the constituents of any given pictorial scenario, and related to the everyman. Rather, I wish to engage in a form of satirical social commentary, Satire specific to social commentary within illustration is relatively unchartered. The narrative aspects as observed within illustration as a commercial commodity have lost favor in the last century within the fine arts and media. Certainly, within the auspices of traditional media image making and purely digital image production, although still present within some specialist subgroups, such as fantasy art, and children’s book illustration. The narrative form of the work I am proposing is biased towards an overview of contemporary society, and realised through both my own creative imagination, and technique, and characterised by social, ethical and moral dilemmas pertinent to the everyman and everyday life, within modern society . An understanding of how the research will relate to my practice., will generally be more understood when my work is viewed in context. My style relies on humorized coding, effects along with a voice framework that utilises graphic and linear mark making, distinguishing itself from purely cartoon line, and airing more towards a realist bias. My style sits between both, in a void of its own, it has my unique sense of vision, and leaning towards humor and cynicism, it helps to create my unique style. My style is not chosen. Or preferred, it is my natural way to work, and so satire is a natural extension, personally and professionally.