As a practicing illustrator I utilise satirical imagery to apportion strength of focus in an effort to illicit effective codices of truths. Satire exists as a construct within any given place and time. It is pertinent to the time of being and to the individuals within the culture it resides. Declercq states; satire helps us cope with a morally sick world, helping us to deal with the limits of critique through the solace of pleasurable autotelic engrossment in entertainment, satire develops comic and ironic coping strategies that we can fruitfully adopt in a world that is sick beyond full recovery (Declercq 2021) Satire as a pluralistic communication is made to both critique and entertain. Critique constitutes moral and opposition against social wrongness, Conversely, entertainment typically involves aesthetic pleasurable diversions. Boland postulates, the overall consequence of satire and critical discourse is the diffusion of generalized cynicism which takes the public sphere as a theater of absurdity. (Boland 2012) Satire as a field of scholarly theory and classification is constantly reinvigorated by contemporary events that test satires assumptions and demonstrate its unstable power within a heterogeneous society. I wish to understand the changing moral and ethical reasoning of consumers in the personally challenging imagery comprehension. In relation to audience encounter, I am interested in finding how and why, a desensitisation of contemporary moral and ethical judgments may have been driven by a seemingly ever-expounding cultural decadence. My research is interested in the existential value of authorial satiric illustration as a cathartic intervention. Within Catharism it is acknowledged that identification with strong emotions is not enough to resolve trauma, the intention for healing and the construction of narrative must also be present (Irvin DY 2000) Commentary, staged narrative. Utilizing the case study of The Sisters of Mercy controversy to promote and measure satirical discourse, and to ascertain the parameters of acceptable imagery. As I will be presenting consumers with potentially harrowing and harmful imagery, that is both morally and ethically compromising, it is important that my practice is based. The Discussion of EBP includes choosing an initial intervention and evaluation procedures, the iterative process of rechoosing and refining an intervention over the consumer life span, and the importance of evidence within the specific consumer situation. (Polio DE 2018) My theoretical research will be synthesised with my satirical illustration practice, and evidenced through the multi-dimensional methodologies outlined throughout this proposal.

The Sisters of Mercy controversy will be utilised as a case study to assimilate theory with practice. I wish to bring a measure of consolation to the victims of the Sisters of Mercy scandal, through Cathartic image and story alignment interventions. Because of this, I seek to understand the paradigms of catharsis in relation to audience encounters, as well as an understanding of satirical illustrations role, as an outlet for expressing overwhelming emotions and unbearable experiences. I seek to quantify desensitisation in relation to ethical and moral reasoning and measure audience encounter of potential image acceptance, and the implications of desensitisation for the wider public domain. I wish to understand contemporary Paradym’s of social taboo, and its relation to satirical discourse and practice. I aim to Build a framework for inquiry to invigorate and inform practice, acknowledging the distinct knowledge of the illustrator as maker and the confluence of reflection and doing. It is acknowledged that there is a distinct rarity of authorial non-fiction illustration within the contemporary illustration genre, I aim to understand the reasoning for this rarity, and hypothesise a new focus for satirical illustration within the modes of authorial practice. ie: As non-fiction social commentary, other than, political caricature, and not exclusive to, cartooning. As the case study intervenes between fiction and non-fiction it may be pertinent to postulate an alternative maxim for the discrepancy. Illustration has lost public favor within the last 50 years. I will compare and contrast media modation within satirical illustration remits to understand this problem as a means of assisting to promote illustration within the general public domain. Contemporary notions of satire both academically and within the normalized constructs of the everyman, have become an ambiguous catch-all term applied to political and sociocultural commentary, humor, parody, sarcasm and irony. Despite the complexity of study in any number of fields, current applications of satire are limited. My research will attempt to formulate a definitive answer to this problem. Not least, to explain and expand the study, of satires pluralistic construct.

A comprehensive literature review, outlined under eight broad headings: a. Satire. e. Ethics and Morality b. Catharsis f. Psychology c. Dessensitisation. g. Social Anthropology d. Humor and comedy h. Illustration (Authorial) A body of satirical illustration will be created in recognition of the terrible hostility, consequential depravity, neglect, and premature death by starvation, of an estimated 9,000 babies, and children, perpetrated by the nuns of the catholic order. Using the aforementioned controversy as a case study, the practice element of the research will engage selected audiences through the dissemination of staged narrative satirical illustration. The satirical illustration will enable a confluence between image and observer, and will facilitate discourse, which can then be quantified and evidenced through questionnaires and interviews, later, disseminated to a broader public domain. Quantitative research will be undertaken as objective knowledge to be verified by corresponding to the real world. I will ascertain the victims of the Tuam case, and utilise appropriate communication techniques to conduct interviews, to understand lived experience, allowing explanation of proposed satirical positioning, and ascertaining individual acceptance/ disproval of proposed research/illustration. Surveys and questionnaires will be further employed, to study a nominated societal section and individuals, to understand reasoning pertinent to the research questions defined. The resulting data will be collated, analysed, clustered and disseminated. Autoethnography is essential for practice-based research because it values ​​personal insights and enables the intimacy required to uncover valuable tacit knowledge. Qualitative research will be employed to explore reasoning and assay how and why the defined theoretical constituents operate. The qualitative data will encompass textual, non-numerical data. Involving images, videos, texts, and written or spoken words. A selection of digital data collection methods, structured and semi-structured surveys, along with approaches comprising individual interviews, group discussions, and presentations will be undertaken. The research will define meaning and relationships, and help to understand the social norms and contextual and/or cultural practices demeaning, and impacting the cause.

The research will be contextualised through the use of exampled artist/illustrator practitioners working within the satirical field. By positioning my satirical illustration practice alongside contemporary satirical illustrators practice, I seek to critically analyse and evaluate my practice in relation to form and function along with its relevance to social commentary. My research will be predominately inclusive of, but not exclusively to, the following visual artists: Illustration: a. Raymond Pettibon b. Laurie Lipton c. Robert Crumb, and Fine artist: Paul Macarthy. The main research focus will be upon the specifics of visual satire; However, satirical discourse will also be gleaned from contemporary, satirically creative individuals and agencies, in areas such as music (specifically the punk band- The Dresden Dolls) satire within mass media, film, mainstream television (spitting image/ Father Ted) and radio , theater, writing, poetry, print (Punch/Charlie Hebdo/Private Eye) digital mems, and Comedy/comedians. I will utilise the found knowledge to build a promotion of authorial satire as social commentary. By positioning my practice (satirical illustration) within the academic and public arena and assimilated with researched ideologies, the opportunity is created to discuss the implications of such work. Observing these avenues of enquiry will further contribute to developing discourse surrounding satirical illustration research, and hopefully, proliferate recognition of the power of authorial non-fiction satirical illustration practices, to provide cathartic solace, the critique of social problems, doctrines and authorities, and ultimately , assist to affect change. The use of authorial satirical illustration as social commentary within a major role of modality, is rarely recognised, a gap this research hopes to realise. By analysing the specific case of the Tuam mother and baby institutions and the consequential moral indictment, and, positioning a staged satirically narrative response, I for a refined and nuanced discussion of the moral and ethical ramifications of the utilisation of satirical commentary both as cathartic intervention, and affectual conscientious descriptor and provocateur, above and beyond contemporary media.

A body of satirical illustration will be created, in the form of a staged narrative. It is estimated that a total of 10-15 images will be required to explain the most effective narrative. The images will range between A0 (33-1/8 x 46-13/16 in) double page spreads, and A3 (11-3/4 x 16-1/2 in) single side. The final satirical illustration work will be framed and exhibited. Perhaps traveling to other selected areas. I envisage the ideal exhibition being curated in the form of mounted and framed illustrations, film/video clips, and music (classical?) accompaniments. I also propose a narrative in the form of a professionally designed and formatted (by self: BA Hons Graphic Design) limited-edition book/e-book publication. Images will be supplemented with a sensitive selection of poetry, and graphics. The illustrations as case study, will be a frame of reference for theory and practice assimilation, it will be presented to a multi audience as a cathartic intervention. Audience participation will be hoped through questionnaires and arranged interviews. Positioned as facilitator, the satirical illustration will act as catalyst, for individual and public debate. If successful, the work will sensitively engage, and gainfully procure emotional structures. Individually defined, ethical and moral paradigms will be exercised. It is then hoped that an individual or collective will, through this reading, become a beneficiary of its cathartic effect. The assimilation of authorial satirical illustration, and the products of the proposed research will enable wider public and theoretical debate. As a matter of hope, the research will affect ideas for change for individuals and groups, not least, it may offer guidance for further theoretical discourse, of which I offer my encouragement. 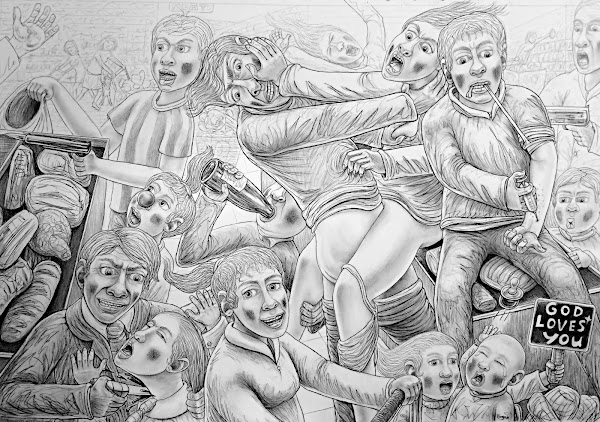